Non-Matter arises from elliptical comparison between idea-reality-desire.
Non-Matter is a kind of (anti-matter) full of amplifications of sensitivity, artificial fibres that enclose themeselves in a hyper-technological aura.
Three theorems:
1) IDEA: of a life beyond reality;
2) ULTRA-REALITY: wich exists because of desire;
3) DESIRE: wich produces the idea of reality.

The iconic essence in silicon of a space-time without limits having passed beyond the time barrier, the space barrier crumbles at the very moment that the time barrier is exceeded.
Thus a wilde space is visualised, opening on scenarios that arise as a consequence of landslide directly created by the dash between Matter-Non Matter.
The boundary between Matter and Non Matter is the site of research, the point in which they mingle, the surface of confusion where the new reality is created, in which Non Matter appearsas tangible, recognizable.
To make this possible we need to push ourselves to the limits of Matter to reach the place where Non Matter exists, to rip shreds of it and bring them to the only visible point, the frontier between Non Matter and Matter. 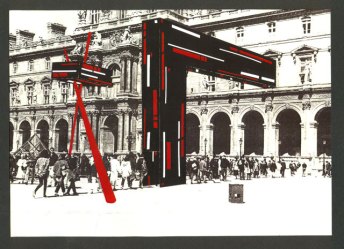